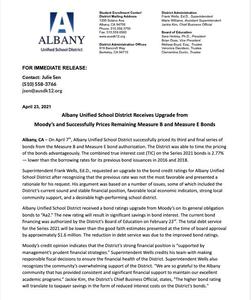 Albany, CA – On April 7th, Albany Unified School District successfully priced its third and final series of bonds from the Measure B and Measure E bond authorization. The District was able to time the pricing of the bonds advantageously. The combined true interest cost (TIC) on the Series 2021 bonds is 2.77% — lower than the borrowing rates for its previous bond issuances in 2016 and 2018.

Superintendent Frank Wells, Ed.D., requested an upgrade to the bond credit ratings for Albany Unified School District after recognizing that the previous rate was not the most favorable and presented a rationale for his request. His argument was based on a number of issues, some of which included the District’s current sound and stable financial position, favorable local economic indicators, strong local community support, and a desirable high-performing school district.

Albany Unified School District received a bond ratings upgrade from Moody’s on its general obligation bonds to “Aa2.” The new rating will result in significant savings in bond interest. The current bond financing was authorized by the District’s Board of Education on February 23rd. The total debt service for the Series 2021 will be lower than the good faith estimates presented at the time of board approval by approximately $1.6 million. The reduction in debt service was due to the improved bond ratings.

On June 7, 2016, District voters overwhelmingly approved two bond measures.  Measure B was a $70 million bond authorization and Measure E was a $25 million bond authorization. The implementation of the bond program has been a resounding success. In aggregate, the total payments associated with the Measure B and Measure E bonds will be $31.9 million lower than the original estimates stated in the bond ballot measures. As a result of these taxpayer savings, tax rates associated with the bond program are projected to be lower than the estimates presented to voters. The Measure B and Measure E bond proceeds have allowed the District to build the Albany Middle School Annex and the Albany High School Addition.  The bond proceeds will also fund the rebuild of Marin Elementary School and Ocean View Elementary School.